Half a century ago, the glacial mass balance (See Formation Section) was zero, and even slightly positive in some regions. However, in recent years, glacial extent has reduced, as the negative mass balance continues to decline (Figure 1). This current trend is proposed to be a result of anthropogenic-induced climate change, which has intensified in the last 40 years. The cumulative losses in glacial mass have increased in rate in recent decades from 226 Gt/year in 1971-2009 to 301 Gt/year from 2005 to 2009 (IPCC., 2013). During this time, snow accumulation and summer ablation zone melt have, on average, increased. There is a positive correlation between these two factors and the mean Northern Hemisphere temperature. Additionally, snow accumulation and summer melt have a negative correlation with a glaciers’ mass balance (Solomon et al., 2007). As glaciers melt, particularly those of Greenland and Antarctica, the melting ice contributes to sea level rise (Figure 2). Global glacier loss has supplied up to 16mm of sea level rise since 1992, Greenland up to 10mm and Antarctica up to 7mm (IPCC, 2013; DeBeer et al., 2016). 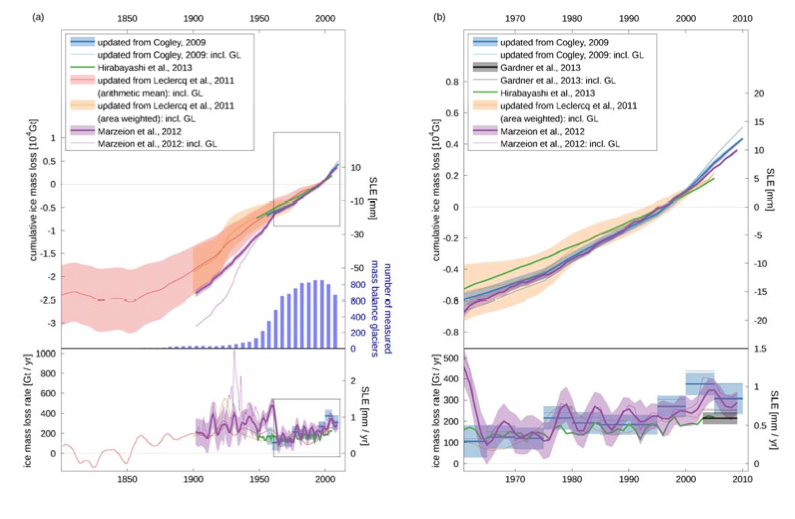 The recent glacier trends have been found to be most extensive in western Canada, Alaska and Patagonia; all humid-maritime glaciers (See Distribution Section). In Patagonia, ice losses have been on average 40 meters during the last half century -- this equals a Mass Balance loss of 36.4 x 103kg/m2, the most extensive loss of all glaciers studied (Solomon et al., 2007).

The following video depicts the most extensive glacier calving ever recorded on film. The splitting ice piece is “Manhattan-sized”, calving off of the Illulissat Glacier in Greenland.